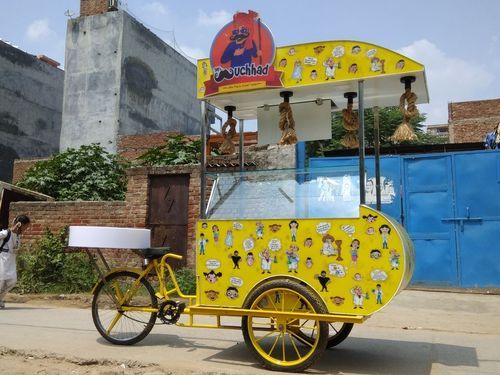 …is another person’s treasure! I serendipitously happened to be covering a shift at my old workplace on the same day a storage space there was being cleaned out. A co-worker came to me and said, “Cle, you might want to check out these things down in the storage space. They’re sort of like ice cream carts.” Wonder of wonders, they actually WERE ice cream carts! And pretty darn good ones to boot. But, they were in need of a little TLC. One had a busted wheel, and the outsides of both of them were pretty scratched and beaten-up in places.

So, I enlisted the help of my handy and artistic friends! My buddy Pat, who’s in construction, fixed up the broken wheel. And my friend Paul worked his painting magic, using a projector to paint the basic logo onto the cart and then skillfully shading and shaping to get it just right. His wife Lindsay helped with the stripes! I put in my time by painting the chalkboard squares on the front. It was truly a team effort and I have to say, they look beautiful!

They were debuted at the Wedgwood Art Festival last weekend and then made an appearance at FareStart’s Guest Chef On The Waterfront event last night. Everyone loved them! They will be used for other upcoming special events and festivals, so keep your eyes out for our new Half Pint Ice Cream Carts!

Here are some before, during and after photos:

Primed and ready for their first coat of paint.

After the first coat of mint green.

All finished and ready to be filled with tasty frozen treats.

Out on the job and working hard!